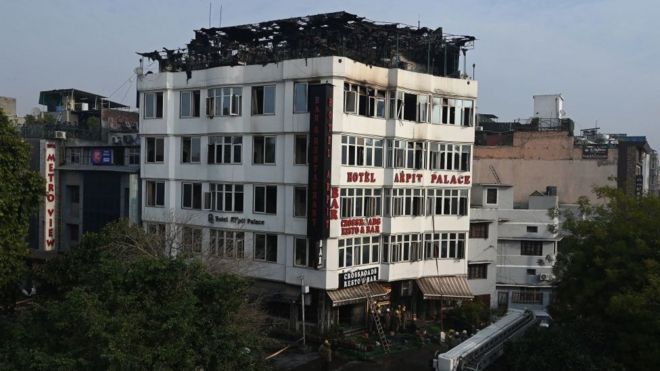 At least 17 people have died in a Delhi hotel fire that broke out early on Tuesday morning, police said.

Eyewitnesses said the dead included a woman and a child who attempted to jump from a window to safety.

Officials said 35 people were rescued. Some were injured and have been taken to hospital.

Hotel Arpit Palace is located in Karol Bagh, an area popular with tourists for its budget hotels and shopping.

Videos recorded by eyewitnesses show people jumping from the building – in one of them, a man can be seen hanging on to the side of the building before he jumps off.

“There was wooden panelling in the corridor, because of which people couldn’t use the corridors to leave the hotel,” firefighter Vipin Kenta told the Hindustan Times newspaper.

He said they were still investigating what caused the fire. Local media reported that most of the deaths were caused by suffocation.

“Ten of us were rescued by police and fire teams,” Somshekhar, one of the survivors, told the PTI news agency. He had travelled to Delhi from the southern state of Kerala with his family to attend a wedding.

He said that there was a power cut early morning, and his sister, who is still missing, had alerted the family to heavy smoke in the corridor near their room which was on the second floor of the hotel.

Many structures, both old and new, lack proper fire exits. In recent months, officials have shut down a number of shops and restaurants in some of Delhi’s most exclusive neighbourhoods for not following fire safety measures.

Owners of commercial buildings have also been known to construct additional floors without the necessary permissions.

Delhi minister Satyendra Jain told the NDTV news website that the Arpit Palace had built a fifth floor with a kitchen and a terrace, even though the owners only had permission to build four storeys.

PTI quoted officials as saying that they had found used fire extinguishers inside the hotel, suggesting that some of those who were trapped had tried to put out the fire.