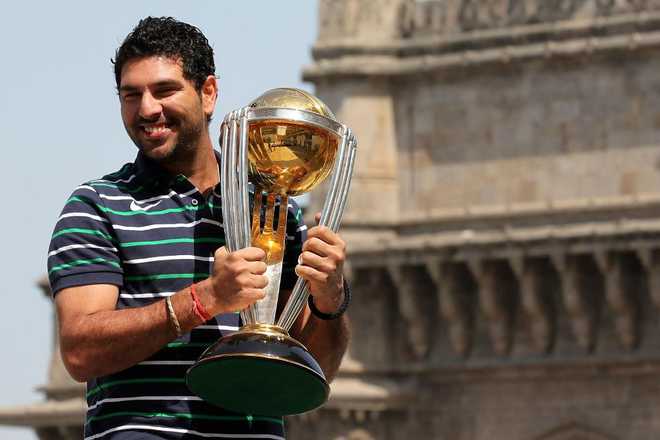 Eight years after he prevented cancer from dictating his life choices, a tearful Yuvraj Singh on Monday brought the curtains down on a roller-coaster career, the pinnacle of which was his exploits in India’s 2011 World Cup triumph.

Tall, willowy and ethereal, his unlimited talent and charisma made him a limited overs legend, but he will walk into the sunset feeling he has not done enough in Tests.

The Punjabi southpaw, though, tried repeatedly to turn back time before calling it quits.

“After 25 years, I have decided to move on. Cricket has given me everything and is the reason why I stand here today,” the 37-year-old said addressing the media in the extravagant interiors of a star hotel that quite resembled his flamboyant batting.

“I was extremely lucky to play 400 games for India. I could have never imagined it when I first started playing cricket,” he added.

“It was a love-hate relationship with this game. I can’t explain what it really means to me. This game taught me to fight. I have failed more times than I succeeded and I will never give up,” he said.

The attacking left-hander listed the 2011 World Cup triumph, being Man of the Tournament in the showpiece, getting six sixes in an over against England in the inaugural 2007 World T20 and his first Test hundred, against Pakistan in Lahore in 2004, as the most special moments of his international career that twisted this way and that through 17 years.

The battle with cancer soon after the 2011 World Cup triumph was perhaps the biggest challenge that he encountered.

“I was not going to let that disease defeat me,” he said.

However, his cricketing form had been on the wane for a while. Yuvraj last played for India in a T20I against England in 2017. His last Test appearance was back in 2012.

He turned up for Mumbai Indians in this year’s IPL but didn’t get many chances.

His exploits at the World T20 in South Africa have remained untouched till date.

Yuvraj’s willow-wielding ways gave nightmares to almost every bowler through the tournament.

Clobbering six sixes in the penultimate over bowled by Stuart Broad in Kingsmead was a moment not many cricket fans will forget.

That performance against England took Yuvraj on top of the pile of fastest fifties in a T20I match, scoring 50 in just 12 balls, a record that has stood the test of time.

As time passed, Yuvraj became an established middle-order linchpin for the Indian team, and a man with a golden arm too.

A testimony of his accomplished all-round abilities was the 2011 50-over World Cup where Yuvraj became the first all-rounder to score 300-plus runs and take 15 wickets in a single World Cup.

The feat included four MoM awards and Man-Of-the-Tournament for the 362 runs and 15 wickets.

“Winning the 2011 World Cup, being man of the series, four MoM awards was all like a dream, which was followed with a harsh reality of getting diagnosed with cancer,” reminisced Yuvraj.

“All this happened so quickly and that too when I was at the peak of my career. I can’t possibly explain the support of my family and friends who stood by me, like my pillars of strength and courage. The BCCI and BCCI president at that time, N Srinivasan, too supported me during my treatment,” added an emotional Yuvraj.

He rated Sourav Ganguly, under whom he flourished, and Mahendra Singh Dhoni as his favourite captains and picked Sri Lankan spin wizard Muttiah Muralitharan and Australian pace great Glenn McGrath as the toughest bowlers he faced in his career.

Yuvraj, a fighter to the core even off the field, battled all odds to return to cricket after being successfully cured of a rare germ cell tumour in the United States.

“This was probably the most difficult time in my cricket career, then the 2014 T20 World Cup final against Sri Lanka when I laboured to 11 off 21 balls. It was so shattering that I felt my career was all but over, everyone wrote me off too. But I never stopped believing in myself,” remarked Yuvraj.

“I felt most pressed when I was making a comeback after having recovered from cancer because that was the time when everyone thought that I might not be the same player again and I had to prove them wrong. That I am still good,” he said. PTI