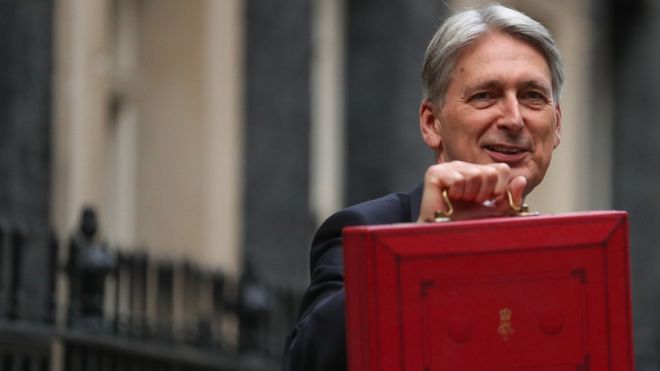 MPs have dismissed the chancellor’s forecast of a Brexit “deal dividend” of lower taxes and higher spending.

The Treasury Committee said it was “not credible” to describe any resultant economic boost from a Brexit deal as a “dividend”.

In their report on the 2018 Budget, MPs said what was being talked about was “avoiding something really very bad”.

They also said the government’s aim of eliminating the budget deficit had “no credibility” and should be abandoned.

Committee chair Nicky Morgan said Chancellor of the Exchequer Philip Hammond had said that in the event of a deal being struck there would be a “boost from the end of uncertainty, and a boost from releasing some of the fiscal headroom that I am holding in reserve at the moment”.

However, MPs pointed out that the Office for Budget Responsibility (OBR) had previously said it was “odd” to refer to this as a dividend.

“The OBR already assumes an orderly Brexit, so there won’t be a ‘deal dividend’ beyond the forecast just by avoiding no-deal,” added Ms Morgan.

“Business confidence may improve with increased certainty, but it’s not credible to describe this as a dividend.”

Following the release of the latest GDP figures on Monday, Mr Hammond told the BBC that the Bank of England had confirmed that there was “upside to come for the UK economy, if we get a good deal which allows us to leave the European Union in good order, in a smooth fashion, business investment will kick back in and we will see a benefit for the UK economy later this year”.

And he dismissed the idea that it was unrealistic to talk about a deal dividend.

The government has also said it is aiming to return the public finances to balance “at the earliest possible date” in the next Parliament.

But the Treasury Committee said Mr Hammond “could have achieved balance by 2023-24 in the Budget without further fiscal tightening, but instead he chose to spend more, largely through increased funding for the NHS”.

“It is clear that the fiscal objective now has no credibility, so it cannot be used by Parliament to hold government to account.

“It should be replaced before the next Budget with something that accurately reflects government policy and priorities, which clearly do not include running a budget surplus,” the committee added.

The report also highlighted comments by the chancellor that “austerity is coming to an end”, which he had told the committee meant “more generous funding of public services, real wage growth and a lower proportion of income going into taxation”.

However, Ms Morgan said: “Claims by the chancellor that austerity is coming to an end are expansive and imprecise. He should set out what he means in more measurable terms, especially as he will face more difficult choices at future Budgets for how to fund such a pledge.”

Shadow chief secretary to the Treasury, Peter Dowd, said the Treasury Committee had “shone a light on the government’s false promises and economic fictions”.

Describing the report as “scathing”, Mr Dowd said: “The chancellor must take no-deal off the table, and use his Spring Statement to finally end the disastrous austerity policies which have done so much damage to the economy and our society.”

A Treasury spokesman said: “Restoring the public finances to health is a result of good economic management, not luck.

“Debt is now falling on a sustained basis for the first time in a generation, wages are growing at their fastest rate in over a decade, and [Monday’s] GDP data confirmed that the UK economy grew for a ninth consecutive year.”